Funny but true stories in the news

Courtesy of the New Zealand Herald

There is a program I like to listen to called "Hop for Wildlife" which is about rescue injured wild life like injured birds, owls, bal eagle hawks, deer, moose, squrrels, to anything that has been lost or injured---that includs any singing or noisy birds. Big thing this is all in Novia Scotia!!!!!

The one I have noted the five baby skunks (this is for your attention Fish N Chips), & is on my channel of #10 around 7:00 Pacific Time.

So the helpers all took a liking to the skunks, but then they also take a liking to any wild thing be it young or wild.

A few days ago the five skunks found a way out & all were at the schooling of very young children before they can go to grade schools.

Obviously the different VOLUNTEER helpers were reaching here or there & pulling them out to be SPRAYED on by the almost adult skunks. Main thing it gave anyone watchiing a good laugh.

Shifting to different programs possible on your TV one I have a liking for is known as Ice Pilots NWT that also comes on quite early for the basic aircraft are 40 year old almost WWII aircraft & finally have this one with four turbo engines. So if you know anyting about flying or interest in it this is a good probram probably before the truckes are going over the ice with this comming on after.

The other one is about Alaska pilots (Flying Wild Alaska ) flying this or that in their country to some of their workers going to some town to get one of two generators going again, considering three were originally used, but one has broke down for several years.
Top

Do you have change for a million-dollar bill? Police say a North Carolina man insisted his million-dollar note was real when he was buying $476 worth of items at a Walmart. Investigators told the Winston-Salem Journal that 53-year-old Michael Fuller tried to buy a vacuum cleaner, a microwave oven and other items. Store employees called police after his insistence that the bill was legit, and Fuller was arrested.

The largest bill in circulation is $100. The government stopped making bills of up to $10,000 in 1969. Fuller was charged with attempting to obtain property by false pretense and uttering a forged instrument. He is in jail on a $17,500 bond, and it isn't clear if he has an attorney. He is scheduled to be in court Tuesday.

In the TV news around 3:00pm Pacific Time, here was this darn crow. It was on the peak of a building & suddenly it came sliding down with its wings flapping at the last part. The Media people figured the Crow was using a cap top, for it flew up with said cap & did it again.

Then aimed for the left side (three sides to this building's roof), only the crow was disappointed for there was no snow & it could not slide down. So hauled the cap over to the side with the snow & continued to do the slide down.

Makes you think of kids sliding on something when young, but this was a CROW & not a human.
Top

We also have NWT Pilots, that covers a kit if deliveries with 40 years old twin ingine aircraft to also one with four turbo prop.

The goings on meant trying to carry the impossible to this tio another place & STILL able to get the rest needed for flyers.

One has to anticipate sometimes one of the ingines will give them trouble so rest is down with just one engine. Amazing thing is so many could get them going again. Yet take, for instance, a while ago a deliver van backed up into part of one wing, so back at HQ they had to search for the parts needed of such old aircraft. My head is left shaking in amazement for I can sort of FEEL THE COLD & yes on a few occations an enging was not kept cold when on ground & that had to be correct .

It is around Channel 38 of my TV & so often around 6:00pm on my Pacific Time. So if you have any knowledge of flying then this will make an interesting one to watch.

From the N.Z Herald 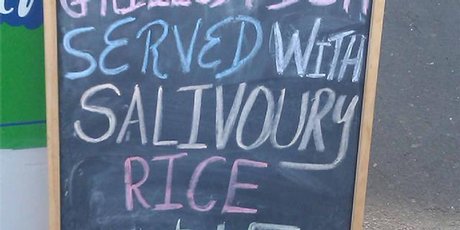 Oh, whose saliva is on the rice? When spelling mistakes cost business money...
Old salt on board.
Top

An armed man barged into a Florida motel room on Thursday, scuffled with his victims, and then dropped his gun -- only to return later to try to buy back his own firearm for $40, according to published reports.

At about midnight on Thursday, Cedrick Mitchell, 39, tried to rob two men at the Royal Motel in Bradenton, The Miami Herald reported. Police told The Herald that Mitchell broke in, asked the men for pills, and when they said they didn't have any, he pulled out a handgun.

Courtesy of the New Zealand Herald