Retired Marine Col. John Ripley, who was credited with stopping a column of North Vietnamese
tanks by blowing up a pair of bridges during the 1972 Easter Offensive of the Vietnam War, died at
home at age 69, friends and relatives said Sunday.

Ripley's son, Stephen Ripley, said his father was found at his Annapolis home Saturday after missing
a speaking engagement on Friday. The son said the cause of death had not been determined but it
appeared his father died in his sleep.

In a videotaped interview with the U.S. Naval Institute for its Americans at War program, Ripley
said he and about 600 South Vietnamese were ordered to "hold and die" against 20,000 North
Vietnamese soldiers with about 200 tanks.

"I'll never forget that order, 'hold and die'," Ripley said. The only way to stop the enormous force
with their tiny force was to destroy the bridge, he said.

Michael Crichton, author of Jurassic Park has died, aged 66, 2008 after a private battle against cancer.

He penned the books Congo, Twister and the popular Jurassic Park trilogy, all of which were adapted
into films.

The show, ER, has had its moments of glory with storylines involving medical staff with various challenges or medical conditions. Remember when Dr. Kerri Weaver came on staff? It was seen as a big deal to show a medical staffer using a crutch to be mobile. Bonus was that she could use sign language.

I was aware of Mr. Crichton's films but did not see them. I'll admit to marvelling at his ability to compose different medical premises for his books.
Frozen? Not I. Love hot drinks and ice rinks.
Top

KHARTOUM, Sudan–Hundreds of thousands of Sudanese flooded the streets of Khartoum today for the funeral of a former president in a potent show of strength for one of Sudan's strongest opposition parties.

Ahmed al-Mirghani was president of Sudan from 1986 to 1989, leading the country's last democratically elected government, before being overthrown in a coup by current leader Omar al-Bashir.
http://www.thestar.com/News/World/article/531441
80s pop music fan here!
Top

JOHANNESBURG (AFP) - Miriam Makeba, the musical symbol of black South Africans' struggle against apartheid, has died at
the age of 76 after collapsing at a concert in Italy.

Nelson Mandela led tributes Monday to the singer who had international hits with songs such as "Pata Pata" and "The Click Song"
while she was banned from entering her homeland.

"She was South Africa's first lady of song and so richly deserved the title of 'Mama Africa' . She was a mother to our struggle
and to the young nation of ours," Mandela said. 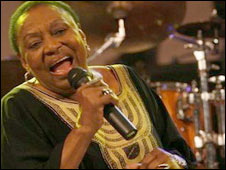 Mitch Mitchell, drummer for the legendary Jimi Hendrix Experience of the 1960s and the group’s last surviving member,
was found dead in his hotel room early Wednesday. He was 61.

Mitchell was a powerful force on “Are You Experienced?” the 1967 debut album of the Hendrix band. He had an explosive
drumming style that can be heard in hard-charging songs such as “Fire” and “Manic Depression.”

http://www.msnbc.msn.com/id/27685408/
The universe is big It's vast and complicated and ridiculous and sometimes, very rarely
impossible things just happen and we call them miracles
Top

The Danish architect of the iconic Sydney Opera House, Joern Utzon, has died aged 90. Associated Press has reported
that Utzon succumbed to a heart attack, while asleep at home in Denmark on Saturday. Quebec provincial police say Hubert (Pit) Martin, a four-time NHL all-star in the 1960s and '70s,
is feared dead after his snowmobile plunged into an icy lake.

Spokeswoman Marie-Josee Ouellet says Martin, 64, was driving the vehicle on Lake Kanasuta in
northwestern Quebec yesterday when the ice cracked and he plunged into the freezing water.

Ouellet says a team of divers will attempt to retrieve Martin's body today.


Unfortunately this happens way too often. While the water may be frozen over it needs time
and a lot of cold to be thick enough to support a snowmobile. One should always check with
authorities to see how thick the ice really is before venturing out on it.
Turn it up, turn it up, little bit higher radio
Turn it up, turn it up, so you know, radio
Top

Ted Rogers, who transformed a single FM radio station into a North American broadcasting, publishing and wireless
telecommunications conglomerate, has died, Rogers Communications said on Tuesday. He was 75.
ADVERTISEMENT

Rogers, who was hospitalized earlier this month for an existing heart condition, died at his home in Toronto.

The company said it planned to form a special committee to select the next chief executive and would consider internal
and external candidates.

Among those believed to be considered are son Edward Rogers, currently the CEO of the company's cable operations, and
Melinda Rogers, the senior vice president of strategy and development.

He may have put a non family member in charge for a while, but I figure there may be some infighting to take complete
control of the empire. A lot is at stake and both Edward and Melinda will probably want a bigger share of that pie now.
The universe is big It's vast and complicated and ridiculous and sometimes, very rarely
impossible things just happen and we call them miracles
Top

Odetta, the folk singer with the powerful voice who moved audiences and influenced fellow musicians for a half-century,
has died. She was 77.

Odetta died Tuesday of heart disease at Lenox Hill Hospital, said her manager of 12 years, Doug Yeager. She was admitted
to the hospital with kidney failure about three weeks ago, he said.

In spite of failing health that caused her to use a wheelchair, Odetta performed 60 concerts in the last two years, singing for
90 minutes at a time. Her singing ability never diminished, Yeager said.