That went fast. Yes it's time to spring forward and set your clocks ahead an hour.

Give me a cheer! Three more days until Standard Time returns to North America. Hip, hip, HOORAY. Yes, a happy moderator is a good sign.

I cheat and do it before bedtime. Does anyone really stay up until 2am to turn the darn things back?
The universe is big It's vast and complicated and ridiculous and sometimes, very rarely
impossible things just happen and we call them miracles
Top

I came across a site that lists countries and when they Spring Ahead begins and when we Fall Back in 2014.

For Canada and the US, it's March 9th and they fall back on November 2nd.

Two months and two days until North America reverts to Standard Time. It's likely that electricity suppliers have different consumption rates/times in effect around the same time as the clock change.

It's time! One hour back at 2am, but for most it will be before bedtime.

There are a number of exceptions dotted across Canada including:

the exceptions In the U.S. are -

* Arizona (except for the Navajo Nation, which does observe daylight saving time)
* Hawaii
* Puerto Rico
* American Samoa
* Guam
* The Northern Mariana Islands
* The US Virgin Islands. 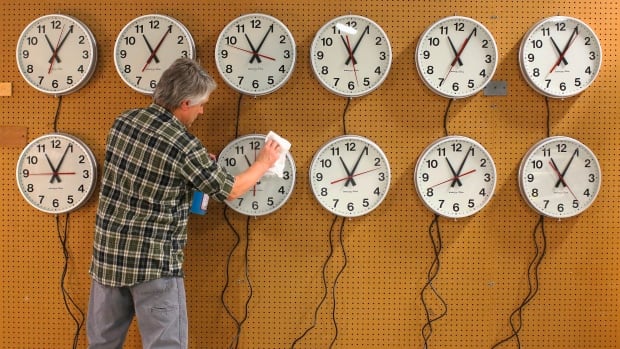 I thought there was one area of Saskatchewan that was observing only Standard Time all year round. I had not known about the BC and Quebec locations. As for the US island territories-tourism is made easier if the time does not change.

Found reference to the Time Act 1966: Saskatchewan is on Central Standard Time year-round except for Battle River (Lloydminister), which observes Mountain Standard Time in the winter.

Hadn't realized that the Northern Mariana Islands were US territories? It's not a familiar name at international sporting events but the place does show up on clothing labels (check licensed designer sportswear tags).

What a treat to have that extra hour for sleep today!
80s pop music fan here!
Top

Next week, North Americans will do one of their least favourite things-put their clocks forward on Sunday, March 8. However, the gardening fans might be already thinking of sprouting seeds for May planting or getting their potting area ready for a warm day.

Antarctica goes ahead on Daylight Saving Time by one week, so this Sunday is DST day.
80s pop music fan here!
Top

Have to get this date into my computer calendar and put a note on the fridge! Thanks for the advance notice.
The count is in...
Top

Tick Tock, it's that time of year again and hopefully the last for Canada.

On time zones, Saskatchewan and Newfoundland are not alone on this planet.

At 2 a.m. Sunday, Saskatchewan will effectively remain on daylight time, while the other provinces return to standard time.

Going by the sun's position in the sky, Saskatchewan should be on mountain time, the same as Alberta. The border city of Lloydminster gets it right and uses mountain time but the rest of Saskatchewan is effectively on daylight time year round, while the province says it's on standard time.

Lots of places do the same, and some by more than an hour.

It's time to reset the clocks and "fall back" this weekend.

Canadians in provinces that use daylight saving time during the summer months will need to turn their clocks back by an hour at 2 a.m. on Sunday Nov. 1 for the switch to local standard time (although it's probably a good idea to do it before heading to bed Saturday night).

In other words, at 2 a.m. local time on Sunday the clocks officially roll back to 1 a.m. and people will get an extra hour in bed.


There is enough evidence to end the practice in Canada, hopefully this is the last time we have to deal with it. Change.org has been busy with so many Canadian petitions since our election started and now finished and DST is the latest one to sign up and with enough signatures, perhaps Trudeau will let the rest stay in line with Saskatchewan.
The universe is big It's vast and complicated and ridiculous and sometimes, very rarely
impossible things just happen and we call them miracles
Top
Post Reply
81 posts