It's Getting Interesting in Hawaii

It's Getting Interesting in Hawaii

.
It seems there is lava flowing out of the earth and causing all sorts of problems.

That, we are informed, is because the volcano called Kilauea woke up some days ago.

Then there was a 6.9 earthquake a short time ago. That followed a 5.4 a bit earlier.

Let us give you the Los Angeles Times for the first link:

EDIT: Let me give you deja vu's post in our other thread about weather events in general:

Some residents no longer have homes and the lava flow continues to threaten homes and communities in the area of the Kilaulea volcano in Hawaii.

A new fissure opened on Sunday night in the Leilani Estates area some 12 miles from the volcano, prompting a cellphone alert for residents to leave homes to avoid sulfur dioxide gas, which can be life threatening at high levels.

So far no fatalities or major injuries have been reported from the volcano, according to the Hawaii County Civil Defense Agency.

Evacuees from Leilani Estates were allowed to return for pets, medications and to check property on Sunday, but some like Jeremy Wilson found homes surrounded by fissures that can be hundreds of feet long.

The lava flows are certainly not a force to impede. Watch lava pop a fence as the flow moves forward (perhaps the origin of the "moving forward" or "going forward" phrases popular in news releases):

When they tell you the boulders that could take flight will be as large as a Fridge, you are in even more serious trouble.


Kilauea, the volcano that's been erupting on the Island of Hawaii over the past week, has already forced the evacuation of nearly 2,000 people and the destruction of more than two dozen homes. Now there's a new threat on the horizon: a violent explosion.

Kilauea — which has been in a near-constant state of eruption for more than 30 years — isn't a volcano that typically erupts explosively in a cloud of ash and spewing lava, the way most people may imagine. Rather it experiences effusive eruptions, where magma moves along rifts below the surface before rising and pushing up through fissures in the earth. (Once above the surface, it is called lava and it moves slowly across ground as it expands, often flowing downhill.)

Kilauea can, however, experience more violent events as a result of something called a phreatomagmatic explosion, which occurs when searing hot magma interacts with water, sending ash and rock spewing into the sky. 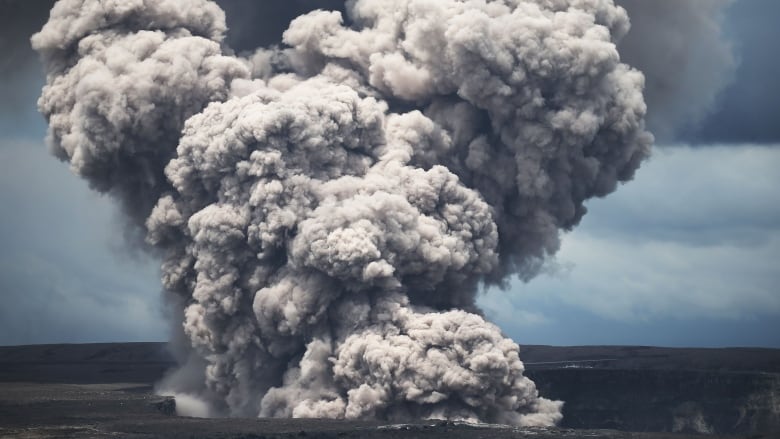 .
I think we'll offer a local newspaper on the most recent eruption:

Kilauea explosion described as ‘dynamic’; ash masks to be distributed

City TV in Toronto showed a live feed of the lava eruptions on their breakfast morning show. At this point, the lava is creating a toxic steam cloud when the lava contacts the Pacific Ocean. There is also fine glass in the clouds. To top it all off, the lava seemed to making a path towards a geothermal plant, where employees were working to shut the plant down.

News article in the Daily Mail from the UK:
https://www.express.co.uk/news/world/96 ... lauea-USGS

Link to webcams that are operated by the USGS in Hawaii:
https://hvo.wr.usgs.gov/cams/
80s pop music fan here!
Top

What is vog? Honolulu Magazine explains:


Vog, a trending topic in the past couple of years as the Big Island eruptions have increased, has moved to the front burner after the opening of a third vent in April. With the tradewinds on pause for the first time since the eruption, we’re about to see just how much sulfur dioxide will be drifting across the ocean, picking up water vapor and becoming an aerosol, thus increasing in particle size before settling over O‘ahu. Because of a lack of monitoring, there’s no way to know; but it could be a lot more than usual.

To prepare, and if necessary ride out the event until the tradewinds return, it’s important to understand that vog itself is not visible. In other words, the haze we associate with vog is a side effect of air stalling over Honolulu and parts of O‘ahu. The haze will certainly hold vog, but vog itself can be present without haze.

The symptoms of vog sensitivity include difficulty breathing, burning eyes, headache (sometimes severe), a metallic taste in the mouth, elevated heart rate and heightened anxiety due to the combination of reactions. For young children, asthmatics, kūpuna and sufferers of respiratory issues, including chronic lung and heart disease, COPD (chronic obstructive pulmonary disease), emphysema, bronchitis or cardiac issues, symptoms may move quickly from irritation to considerable discomfort. Medications should be used promptly. Some cases may require medical treatment; patients and caregivers shouldn’t hesitate to contact a doctor.

Update on precautions taken at the geothermal plant near the Kilauea volcano lava flow path:

Residents have been concerned about hazards if the lava flowed over the plant's facilities, or if heat generated would interact with various chemicals used onsite.

Ten wells were "quenched" by cooling them with enough cold water to counter the pressure of volcanic steam coming from below, said Hawaii Gov. David Ige.

The last well was plugged with mud, because it had remained hot despite the infusion of water. Metal plugs in the wells, which run as deep as about 2,450 metres underground, are an additional stopgap measure.

Becoming life threatening for those that thought riding it out was a good idea. Now they need to be rescued and are putting others lives
in danger. Warnings are for a reason and should not be ignored.


Nearly a dozen people are stranded in an area cut off by lava following "vigorous eruptions" from the Kilauea volcano, Hawaii authorities announced Sunday.
Hawaii Civil Defense Service officials said they went through the neighborhood to warn residents this was their last chance to evacuate before their final escape route was cut off by lava.
Some chose to stay in the area, which now has no power, cell reception, landlines or county water, officials said.
Authorities are planning to airlift people out if the lava spreads farther and endangers the dozen or so holdouts. Some said they were staying because they had nowhere else to go, officials said.

Three people were evacuated from an isolated part of the Kapoho community Sunday, according to the Hawaii Fire Department.

At least some prefab housing is being assembled to help house residents who had to leave their homes in the lava flows.

The lava flow into the ocean has given one tour boat group a real lesson on random events:


He didn't observe "any major explosions," so he navigated his vessel closer, to about 250 yards away from the lava.

"As we were exiting the zone, all of a sudden everything around us exploded," he said. "It was everywhere."

Turpin said he had no idea just how big the blast was until he saw video of the event later on shore.