To remember those brave souls that have fallen and to those that have returned to their home.
We honor all of you for your sacrifices of the past and present.


"Remembrance Day marks the anniversary of the official end of the World War I hostilities on
November 11, 1918. World War I was a massive conflict was played out over the whole globe,
but particularly in Europe, where troops from Canada supported the Allied forces. World War I
resulted in the loss of huge numbers of lives amongst both civilians and military personnel.
Many more people were badly injured. The war left great emotional scars in the servicemen,
who had experienced it, and in the communities, whose sons, brothers, fathers, uncles and
even grandfathers had died. Remembrance Day commemorates those who died in armed conflicts,
particularly in and since World War I.

In Canada, November 11 is officially called Remembrance Day, but it is also known as Armistice Day
and Poppy Day. Remembrance Day is commemorated in many countries, particularly members of the
Commonwealth, including Australia and New Zealand (where it is also referred to as Armistice Day).
In the United States, Veterans Day falls on the same date. In the United Kingdom, the Sunday closest
to November 11 is known as Remembrance Sunday."

Ceremonies have taken place across the UK to remember the servicemen and women who lost their
lives in all past and current armed conflicts.

The Queen led Remembrance Sunday tributes at the Cenotaph in London's Whitehall before thousands
of veterans marched past the monument. Troops on active service in Iraq and Afghanistan also held services.

This year's events come just two days before the 90th anniversary of the armistice at the end of World War I.

The commemoration of Britain's war dead began with a gun blast and two minutes' silence on Whitehall.
The Queen then laid the first wreath of poppies. 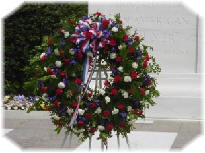 At Henri-Chapelle in Belgium, Meuse-Argonne in France and Sicily-Rome, countless tombstones tell the
stories of those who gave their lives in battle.

On Veterans Day, Americans are asked to do something for the country besides voting and paying taxes:
We are enjoined to think of those who fought in faraway places – the Philippines, North Africa, Europe,
Vietnam and Iraq.

Most of them came home, but some did not, even in death. The remains of more than 120,000 war dead
rest in American military cemeteries abroad, beneath rows of white marble crosses and Stars of David.
Many of the graveyards, including 20 in Western Europe, lie on or near the battlefields where U.S. military
personnel fought and fell.

Meticulously maintained by the American Battle Monuments Commission, a small federal agency mandated
by Congress in 1923, the cemeteries are profoundly beautiful and meaningful places. Mostly, they’re visited
by relatives and veterans, but occasionally an American tourist happens by a gate where the Stars and Stripes fly,
turns in and sees the massed graves of American heroes who sleep on foreign soil.

That is how I found the American cemetery in the Grand Duchy of Luxembourg earlier this year, where I sat
on the freshly cut lawn near the graves of two brothers, wondering how they died and what they would have
done if they had survived.

http://articles.latimes.com/2008/11/09/features/tr-war9
The Moose sees all, hears all, knows it all. Listen to your
local moose, Folks!
Top

Do consider attending the municipal service in your area if you can. Your attendance is important to the veterans still able to come outdoors for the services to remember fallen colleagues. Some communities offer a social reception afterwards to allow veterans and residents to share time indoors and talk for a spell.
Frozen? Not I. Love hot drinks and ice rinks.
Top

Ceremonies are being held across the globe to mark the 90th anniversary of the end of World War I.

At a service in Verdun, north-east France, President Nicolas Sarkozy paid tribute to the millions who
died during the four-year conflict.

French and German troops fought for eight months at Verdun in the longest battle of a war that
reshaped Europe.

In London, three of the four surviving British World War I veterans attended a ceremony at the Cenotaph.

At 1100 GMT, a two-minute silence was observed, marking the time - at the 11th hour of the 11th day
of the 11th month - when the Armistice Treaty came into effect to end the war.

Last Updated: 6th November 2009, 1:03pm
The CN Tower today announced it will be lit up with red lights to honour Canadian veterans and those killed in wars and on peacekeeping missions.

Representing the colour of the poppy, the world's tallest light display will be turned on for Remembrance Day on Nov. 11.

Something none of us ignore for that part of history was well tough in all schools. I was glued to the radio like my parents, to friends with lost brothers to cousins to uncles. Also for several years I delivered newspaper in a Armed Forces medical hospital. You simply never forgot the chaps that were suffering & after a while passed away after several operations.

Some of the chaps told me I was welcome to the latest of a movie & be with them to where I saw more injured to burned coming in to also watch.

Some of the vets would be sick for some time & owe me for constantly putting the newspaper there, as they requested of a nurse told me. They trusted me that much to sort through the change & come up with what they owed to also do it later on in their suffering.
Top

Winnipeg Rifles Regiment member Cpl. Dave Anderson on the honour guard to remember the fallen on Remembrance Day at Vimy Ridge Park in
Winnipeg this morning.

The universe is big It's vast and complicated and ridiculous and sometimes, very rarely
impossible things just happen and we call them miracles
Top

If you have a business in Ottawa, be aware that a city bylaw exists prohibiting opening on November 11 until after the cenotaph services have concluded. One grocery store found out by being fined.

The manager of the T&T Supermarket, Jimmy Wen, said he didn't know about the bylaw, which has been in place since Ottawa's amalgamation in 2001, when it was adopted from the former city of Ottawa.

Wen said the store was very busy Wednesday, with as many customers as it would normally see on a weekend day.
City bylaw officers visited the store at 11:30 a.m., after the store opened at 9 a.m. http://ca.news.yahoo.com/s/cbc/091112/c ... ian_market
80s pop music fan here!
Top

Seems that the US and Canadian stores have different ideas about how early Christmas promotions can start. Stateside, stores start them before November 11. I heard that in Canada, there is sensitivity about sales/windows relating to Christmas before and during November 11. The store chain Eddie Bauer has a sale named for Veteran's Day. Wal-Mart got into Christmas right after Halloween.

The Black Friday retail rush after Thanksgiving is a trend I want to see stopped. No losing people due to crowds and pushing just for savings on a holiday.
Burger time
Top
Post Reply
24 posts