Imagination and building blocks made playtime fun in my childhood. A box or pail of blocks were handy to have on hand for visiting children in later years, so the adults could have a conversation. Also, this meant I managed to avoid playing house or dolls. Making buildings, outdoor structures or putting cars together to push on roadway plates was better fun.

A New Yorker posted some pictures of his view of New York City life as seen through Lego blocks: 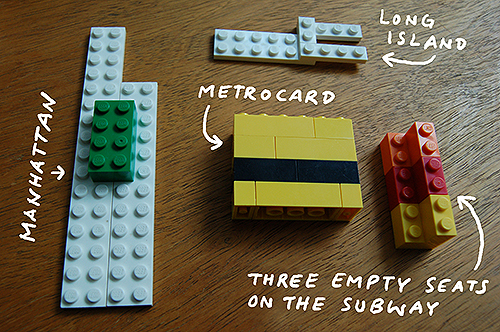 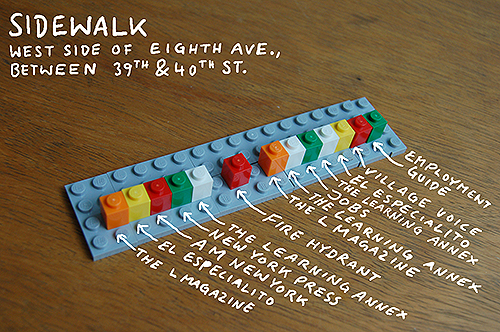 A Lego guy looking to make new friends gets mugged. But wait! There's a good outcome.

Found a page about the Nice Pants animator, for those as curious as I as to how he made the animation.
http://www.thread.co.nz/news/2385/15/Ni ... enn-Dawick

Some Lego employees won't feel loving over news that they will be let go from the Danish company.

Lego to fire dozens despite massive profits
Thursday, 26 November 2009 13:45 RC
Employees at the company’s Billund location will be let go due to the overseas relocation of production

Citing an adjustment in connection with its post-Christmas low season, toy company Lego is eliminating 66 hourly-waged employees from its Lego Group factories in Billund.

Lego’s management announced the news today, saying the move was a ‘necessary adjustment’ related to the establishment of new facilities. This was done despite the company posting almost 1 billion kroner in profits in its half-year report – an increase of 23 percent over the same period in 2008.

The company posted sales of 4.4 billion kroner for all of 2008.
http://www.cphpost.dk/business/business ... ofits.html
Frozen? Not I. Love hot drinks and ice rinks.
Top

Robotic competition in Arizona for the kids keeps the brick brand in the news. To spectate at this event probably requires time, interest in Lego, and lunch money.

300 competing in Lego championship at ASU
by Kerry Fehr-Snyder - Dec. 10, 2009 12:50 PM
The Arizona Republic
Arizona State University is hosting the First Lego League robotics championship this Saturday where 300 students ages 9 to 14 statewide will be vying for a chance to compete in the national finals in Atlanta.

Two groups of students from Basha Elementary School in south Chandler will be among the competition.

Basha School's two teams, working under the direction of teacher Susan Jernigan, compete under the names "Those People" and "Crash Test Dummies."
http://www.azcentral.com/community/chan ... o1211.html
Staycation=stay at home and do fun things inexpensively.
Top

Brazil made a Lego tower that beat the record held by Chile! The tower sections seem built in layers and were then added to the structure, even using a crane and rubber mallet for the assembly.

Being somewhat older mine were bits of a Mechano sets my father bought, at a second hand store so many were not completed, for me to have in Xmas. I just loved taking this or that apart or assembling it a different way & I soon learned not to loose any nuts or bolts or do it incoffectly.

Possibly this led me to learning how to work with a jig saw, table saw, drill press, grinder, to metal cutting lathe as my father advised me. After all it was his hobby as well.

So when I had my first few m/cs & working on one at home then guess who also wanted to tinker around? Not to mention my first scooters I built before the end of WWII what with a glob of petrol powered motors used by farmers lacking any electric power so these small motors were for me to rebuild & attratch to the home made scooters as outdated as they are compared to scooters of even back in the 50s from basically Spain to also Italy & Germany.

You see with my m/c experience I would work on the local lads scooters in Banff eventhough I was instrute man on the Trans Canada hwy as well as part owner of a sport shop & basically did any of the physical jobs there to even repairing skies, harnesses, to fitting skiers with boots & same to fellow mountainers.
Top

Girls can look forward to new Lego sets that reflect their interests after research teams examined what girls want in their playthings and how they play. The sets will even be shelved apart from the other Lego sets that appeal to boys. The article even has a "Lego Girls Graveyard" graphic, showing earlier efforts to appeal to girls with sets just for them. Too much use of pink in those past efforts. Clik-Its were definitely "not Lego" sets.

Adult fans of Lego cannot enter a Legoland Discovery Centre without a child. It is a rule posted on the website for the Vaughan, ON attraction that opened this spring. http://www.legolanddiscoverycentre.ca/t ... visit.aspx

A senior fan of Lego drove a long way to visit the store but could not enter due to the rule.

The only time that the rule is not adhered is for the monthly adults only theme nights with reduced admission prices.
80s pop music fan here!
Top

Only in Australia: a LEGO Christmas tree.

Lego senior project manager Dale Chassy, who worked on the project with his team in the United States, said: "We were working on it for about six months, which is a quick turnaround for a model of that size. But we [thought we] can't build it in the US, so we need to partner up with Ryan."

Ryan is Australian Ryan McNaught, a Lego certified professional. And Mr McNaught has a secret for any visitors to the structure.

"When people look at the tree, they should have a closer look," he said. "Throughout the whole set, there are little secret touches. There might be a couple of visitors from a galaxy far far away."

Lego Certified Professionals have a Facebook page: https://www.facebook.com/LegoCertifiedProfessionals
The website explains why they have the title: http://aboutus.lego.com/en-us/lego-grou ... essionals/
Yes, there is a woman in the group who builds with Lego!
80s pop music fan here!
Top
Post Reply
11 posts