I loved the first 2 Mummy movies. Have not seen this one yet. The reviews are
mixed.

The Mummy: Tomb Of The Dragon Emperor

THERE are many wondrous items of information in the publicity notes for the
latest Mummy movie but nothing eclipses the news that the film's director,
Rob Cohen, is a Buddhist with a scholarly interest in the history of ancient China.

Previously known for pouring on the petrol in the street-racing movie The Fast And
The Furious, Cohen has kept his meditative side from us until now and I can't say that
it really gets much play in The Mummy. 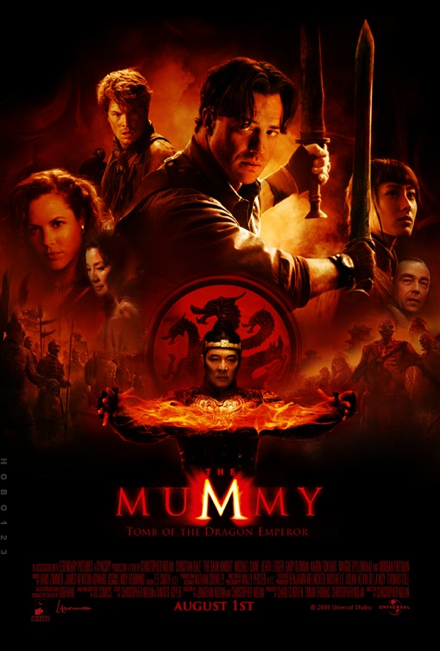 Given the fact that movie ticket prices continue to climb, I think I will wait till it comes out
on DVD or shows up on TV. Hope its as good as the first two.
The universe is big It's vast and complicated and ridiculous and sometimes, very rarely
impossible things just happen and we call them miracles
Top


What did you think of it? Most of the press seemed to stick to the idea of the connection between
Heath Ledgers death and his character the Joker. I havent heard too many reviews of the movie itself.

Worth seeing? Better or worse than the other Batman movies that hit the big screen?
The Moose sees all, hears all, knows it all. Listen to your
local moose, Folks!
Top

A fourth film in the Pirates of the Caribbean franchise was among a raft of projects unveiled by the
Disney studio at a Hollywood showcase this week.

If realised, Johnny Depp will reprise his role as Captain Jack Sparrow.

Stone's film revolves around the relationship between George W. Bush and his father, former President George H.W. Bush, and goes
so far as to imply that the decision to invade Iraq stemmed in part from Bush the Younger's desire to move out from the shadow of
Bush the Elder.

But Jeb's not buying it.

Clocking in at one and three-quarter hours, it's a good half hour shorter than 007's previous outing.
And its reduced running time results in a leaner, tauter experience.

Picking up shortly after the end of Casino Royale when Bond confronted the mysterious Mr White,
Quantum of Solace quickly throws him into a round-the-globe hunt.

Bond is trying to track down the shadowy organisation whom he holds responsible for the death
of Vesper - the woman he loved and who died at the end of the last movie.

Quantum of Solace actor Daniel Craig says there may not be another James Bond film anytime soon - because of
the credit crunch.

The star claims the world's current economic climate is taking its toll on movie producers, who may struggle to
find the cash for the next instalment in the spy franchise.

He said: "As far as the next film is concerned, there is nothing scheduled. Economically the world is in quite a
lot of trouble so who knows if we can afford to do another Bond movie any time soon?"

Despite his concerns, Craig would have no hesitation saving the world as 007 again.

I have not been in a movie theatre this year, so DVDs from the last 2-3 years are my source of filmed entertainment.

If you like contemporary/hiphop music with some ballroom dancing mixed, Take The Lead is the dance movie of the night for you. Yes, you can see some places from Toronto fairly easily in some scenes as part of New York City, in which the movie takes place.

If you like family dramas featuring different cultures and would not mind to cry during a few scenes, The Namesake, featuring Kal Penn, is the movie for you. The lead actors playing the parents were noteworthy in trying to convey a sense of raised in one place, and living live in another place. Their "offspring" capture some of the cultural conflict that children raised in North America can feel when the parents keep their own cultural ties in the home.
80s pop music fan here!
Top

Quantum of Solace, starring Daniel Craig, smashed the previous record for a Friday opening of
£4.025m, held by Harry Potter and the Goblet of Fire.

Princes William and Harry attended the film's world premiere in London on Wednesday ahead
of its general release.

War as wisdom and gore
John Woo's latest epic, 'Red Cliff,' has been a lifetime in the making

A prominent example of how modern technology altered the world is seen in the way men
wage war. In John Woo's battle extravaganza "Red Cliff," set in China in 208, armies fight with
spears and shields and bare hands; they traverse deserts and treacherous mountain paths on foot
and subsist on little more than rice and water, with the occasional stolen water buffalo to still
the craving for protein. A simple message from one general took weeks or even months to reach
another, and the fighting itself lasted for decades. The torch flame of triumph and/or revenge was
passed from father to son to grandson, often right there on the battlefield. And if the soldiers had it
rough, the civilians, most of them farmers, had to endure pillaging, rape and arson, their tilled and
seeded farmland turned overnight into a wasteland of corpses.