Senior officials have been forced to disclose their income since December. But the new legislation does not force Russian bureaucrats to disclose the income of any grown-up children or relatives. No agency has been tasked with establishing whether the declarations are true.

Russia is among the countries which have not signed the Organisation for Economic Co-operation and Development's convention against bribery and is frequently criticised by anti-corruption watchdogs.

Medvedev was in the news recently, something about how United Russia can detemine who the next governors are, but he as president retains the final say if the candidates do become governors. Something about how he is veering away from Team Putin strategy and showing some independent thinking of his own.

There could be perks related to his presidency that make up for the lower pay.
Burger time
Top

Russian President Dmitry Medvedev has warned the European Union not to turn a proposed partnership with former Soviet countries against Moscow.

Mr Medvedev was speaking at the end of a Russia-EU summit held against a background of deep divisions over security, trade and energy supplies. He also signalled a new gas crisis may lie ahead, suggesting Ukraine lacks the money to pay for gas Russia provides.

A row over prices severely affected supplies to Europe in January. The BBC's Richard Galpin in Moscow says divisions between Russia and the European Union seem to be growing ever wider, and this latest summit, held in the far east of Russia, made that abundantly clear, with little sign of progress on any significant topic.

Obama's diplomacy being tested in Russia
Jul. 6, 2009 07:09 AM
Associated Press
MOSCOW — President Barack Obama opened his first Moscow summit with confidence on Monday, predicting "extraordinary progress" out of meetings set to test his diplomatic skills on important priorities such as nuclear arsenal reductions and the fight in Afghanistan.

"The United States and Russia have more in common than they have differences," Obama said he sat down in an ornate Kremlin room with Russian President Dmitry Medvedev.

Russian President Dmitry Medvedev has expressed "outrage" at the murder of a prominent human rights activist, Natalia Estemirova. He has ordered an inquiry into the killing of Ms Estemirova, who was investigating alleged abuses by government-backed militias in Chechnya. She was abducted and bundled into a van as she left her home in the Chechen capital, Grozny, on Wednesday. Her body was found in neighbouring Ingushetia, with gunshot wounds.

Ms Estemirova, 50, had been gathering evidence - for the Russian human rights organisation, Memorial - of a campaign of house-burnings by government-backed militiamen.

Business and free trade mark Medvedev visit
by Giles Broom
Geneva - September 22, 2009 | 10:25
Trade discussions and business meetings accompany a state visit by Russian President Dmitry Medvedev this week. Russia and Switzerland are signing political agreements on visas, sport and natural disasters, but the visit is also being seen as part of a longer-term effort to attract Russian money to Switzerland and boost commercial ties. Economiesuisse is calling for a new free trade agreement following a conference between Swiss and Russian businesses yesterday.
Russian President, Dmitry Medvedev touched down on Monday morning at Kloten Airport, near Zürich, accompanied by his wife Svetlana Medvedeva, to be greeted by Swiss President, Hans-Rudolf Merz and Foreign Minister, Micheline Calmy-Rey. Medvedev is the first Russian head of state to visit Switzerland. He received ceremonial military honours, presented a diplomatic gift of two bears while recieving two giant rare crystals from the Swiss in exchange. 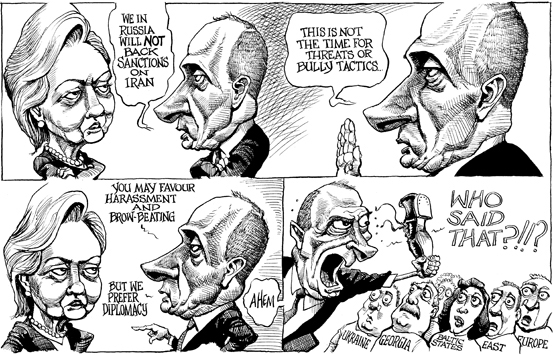 Russia and Iran both have oil pipeline projects. Also Iran gets its airplanes and parts from Russia. Which country wants to lose its trade with the other one?
Burger time
Top

Russia's big pipeline project signs deal with Slovenia to allow its pipelines through the country. Ambitious plan. I came across the story link after reading the news article about the deceased mountain climber:

Westward Expansion
Gazprom's American Ambitions
By Steve LeVine
Europe knows all about how tough Gazprom can be at the negotiating table. Now Gazprom, the bare-knuckled king of natural gas, is out to make its mark in America.

Just how tough is Gazprom? As the world's biggest supplier of natural gas, the Russian company has a reputation for hard-nosed bargaining. So when John Hattenberger, chief of the company's new US operation, hired George Thorogood and The Destroyers to play at a party marking the opening of Gazprom's Houston office, he insisted Thorogood leave his Epiphone guitar after the show. "That was clause 19 of the contract," Hattenberger jokes. Today the autographed instrument hangs above Gazprom's trading floor.

That's Gazprom with a sense of humor. But more often, its negotiating style is no laughing matter. In January, Gazprom slowed gas deliveries to Ukraine in a price dispute, leaving customers further down the pipeline in Central Europe shivering in the winter cold-the third time in three years Gazprom has taken similar steps. http://www.spiegel.de/international/bus ... 75,00.html

Gazprom is in the US? How did we miss that breakthrough in business? Let's hope that no one has to go without natural gas this winter due to pay disputes. Ukraine ought to have its finances in order to take care of winter bill.s
80s pop music fan here!
Top
Post Reply
48 posts