The collision between a US and Russian satellite in space highlights the growing importance of monitoring objects in orbit.

It also shows that there are still major capability gaps in current systems set up for this task.

There are about 17,000 man-made objects above 10cm in size that orbit Earth - and the tally is constantly increasing. This in turn raises the risk of collisions between objects.

Richard Crowther, an expert on space debris and near-Earth objects, told BBC News: "It is unfortunate but inevitable, first that we would see such a collision in Low Earth orbit, and secondly - given the number of Iridium satellites in its constellation - more likely that the Iridium system would be affected rather than single satellite systems." 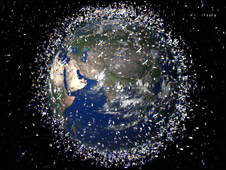 Its getting crowded up there. Im amazed that none have hit the space station.
You won't get your cheque if you don't punch the clock
Top

So there is a bit more crap up there then most of us realized. Guess those lobbing things up that high should ALSO go togeather on comming up with a sort of CLEAN UP MACHINE if that can be conducted otherwise some of our more costly ones might be damaged in accidently running into some larger pieces travellin right into them at around speed of a Bullet. Now if the slower speed of a 45ACP then a 9mm I still would not like to be hit by something the size of a 45ACP for the weight of a 220 or 223 grain is what knockes one down compared to a 9mm of just 125 grains. Yes the 45ACP is appreciated as it is a killer due to weight & believe me you cannot duck a 45ACP like they believe in the movie world when ducking a 9mm. LOL LOL
Top

Smitty, Im wondering just how close the satellites and the space junk are coming to the Space Station.
Its not like they can duck and cover until it passes.
Beam me up!
Top

.
I can't seem to pull up http://www.stratcom.mil, but I think the person that wrote that BBC article is off by about 13,000 or more. I have to go from memory on this, but I think StratCom is presently tracking 30 plus thousand objects that are over 10cm in size.

I also am wondering what this line is supposed to mean?

It also shows that there are still major capability gaps in current systems set up for this task.


Is the writer implying that monitoring was not efficient, in this case. I haven't read anything that indicates this was StratCom's fault. It might have been the company's decision not to use the satellite's manuevering capability.

I could be wrong in questioning the writer's conclusion, because I haven't really had the time to study this incident, so I'll post a retraction if I find out this was such a surprise that the company had no time to manuever it's satellite and not that it chose not to.

Oh yes, I think somebody wrote about the ISS, right? They do manuever for avoidance when given instructions. Been done a number of times. There are, of course, objects smaller than 10cm that can do harm, too. They might not be spotted by StratCom. But, heh, it's space. We're still learning. It's a risk, no matter how hard we try. Might always be. Pilots closer to Earth have accidents and monkeys do fall out of trees. Nothing's a given.

Sonic booms and at least one fireball in the sky were reported in Texas on Sunday, less than a week after two satellites collided in space and a day after the Federal Aviation Administration asked U.S. pilots to watch for "falling space debris," authorities said.

There were no reports of ground strikes or interference with aircraft in flight, FAA spokesman Roland Herwig said.

Herwig told CNN the FAA received no reports from pilots in the air of any sightings but the agency recieved "numerous" calls from people on the ground from Dallas, Texas, south to Austin, Texas.

Video shot by a photographer from News 8 TV in Austin showed what appeared to be a meteor-like white fireball blazing across a clear blue sky Sunday morning. The photographer caught the incident while covering a marathon in Austin.

Media lead us that said collision was an American collided with a Russia weather station. POSSIBLY is was different & actally two Russian ones. This below, though long, comes from media that deals more with military matters.
Rogue Russian Satellites Gone Wild
February 13, 2009: Another collision in orbital space has destroyed an operational communications satellite (one of the Iridium birds, which supplies satellite phone service), at an altitude of about 770 kilometers over central Russia. The Iridium satellite was hit, on February 10th, by a dead Russian communications satellite (the one ton Cosmos 2251, equipped with a nuclear power supply, launched in 1993). The Russian bird could not be moved, nor could the Iridium (which, while active, was not equipped with thrusters for movement). The Iridium bird was one of sixty, so satellite phone services was not interrupted, because of the spare capacity in the system. The collision turned the two satellites into 600 bits of debris.
The last time anything like this happened was in 1991, when a dead satellite ran into debris from another, and created more debris. There have been two deliberate collisions since then. Two years ago, China launched a "killsat" that maneuvered into the path of a dead Chinese weather satellite, and destroyed it. Last year, the U.S. Navy used one of its Aegis equipped warships to destroy a malfunctioning U.S. spy satellite with an anti-missile missile. Russia and China have since called for such U.S. activity to be outlawed.

After sixty years of humans putting objects into orbit, there is a lot of junk up there. Currently, over 300,000 dangerous objects 10 mm (.4 inch) in size have been identified. The smallest of these is capable of disabling a satellite, or damaging a spacecraft. That's because these objects hit at very high speed (9-10 times faster than a bullet) if they, and their target, are coming from different directions.

There are nearly 18,000 objects 10 centimeters (4 inches) or larger. These can do some catastrophic damage, to satellites or spacecraft. There are billions of objects smaller than 10mm, and these are responsible for many satellites failing early because of cumulative damage from getting hit by several of these micro objects. There are also about 220 commercial satellites up there, plus nearly as many military ones.

There are lots of people keeping an eye on this clutter. The U.S. Air Force Space Surveillance Network, which tracks nearly 18,000 objects 10mm and larger, stopped sharing all of its information five years ago, for national security reasons. The Russian Space Surveillance System is known to use radar to track over 5,000 objects in low orbit. But the Russians have never shared this data completely, or regularly. Filling in the gaps are two international organizations; IADC (Inter-Agency Space Debris Coordination Committee) and ISON (International Space Observation Network). IADC is a government operation, whose members include the U.S. NASA, and the equivalents in Russia, China and several other major nations. Like most government organizations, not all data is shared.

ISON is a non-government organization, and they come up with some of the most interesting stuff. ISON comprises 18 scientific institutions, 18 observatories, 25 telescopes and over a hundred professionals. ISON does not, as far as anyone knows, withhold data because of any national security concerns. This is fairly certain because ISON work is monitored, and complemented, by the efforts of thousands of amateur astronomers and orbital addicts who connect via the Internet, and constantly scour the orbital space for new objects, and dangerous movements by existing ones.

ISON already has spotted 152 larger (over 10mm) objects that have never been reported by any of the government organizations. The Internet based amateurs are often the first to spot a lot of this new activity, mainly because they have more eyeballs, and, in some cases, impressive optical equipment, searching the skies.

When someone spots an object headed for a maneuverable satellite, the owner is alerted, and the bird is moved. This has happened several times in the last few years. The number of dangerous objects up there increases 10-20 percent a year. That's even with many of them falling into the atmosphere and burning up each year. Apparently, no one was able to predict the collision between Cosmos 2251 and the Iridium bird, largely because the high speed of these objects, and slight instability of their orbits, can turn an expected near miss into a direct hit.
Top

That was a close call.

The two astronauts and one cosmonaut aboard the International Space Station had to duck for cover Thursday as space debris passed perilously close to the orbiting platform.

Crew members Sandra Magnus, Michael Fincke and Yury Lonchakov were ordered into one of the Soyuz TMA-13 escape capsules at 12:35 p.m. EDT.

In case the space station was hit, the astronauts could have undocked and headed back to Earth. The window of danger passed at 12:45 p.m., and the three crewmembers left the capsule and reentered the space station.


At least they mastered "duck and cover".
Beam me up!
Top

Seems countries that are scooting missles or whatever being dumped from them once up there AND now the space is worse then a traffic tied-up & some accidents in some of the busiest holidays AND no one has figured out how to scoop up said waste to make missels safe. Rather interesting especially with the latest American one with hope it will not be hit when docking.
Top


DARMSTADT, Germany - Researchers concerned about an increasing amount of debris orbiting the earth are calling for the active removal of space junk, saying it will ensure a safe environment around the planet.

More than 300 scientists and other experts who met for four days at the European Space Agency said Thursday that sharing information is a crucial first step in preventing collisions and predicting with more accuracy where derelict satellites may fall to earth.

"We need to share more data," said Thomas Schildknecht of the Aeronautical Institute of the University of Bern. "We consider this most import and challenging part for the immediate future."


Even if they find a way to do this I cant see it happening. The cost would be astronomical.
Cheese Please!
Top

Get some big-name sports teams and players together to finance a couple of space junk catchers' mitts to catch the junk. One mitt chases the junk and the other holds the junk until the mitts burn back down on re-entering the atmosphere. Every spring and fall, toss the mitts back up into space to sweep through.
Staycation=stay at home and do fun things inexpensively.
Top
Post Reply
33 posts