Ballesteros to have more surgery

Golf legend Seve Ballesteros will have a third operation on Friday to reduce brain swelling after the discovery
of a tumour earlier this month. The 51-year-old collapsed on 6 October and is in a serious but stable condition
at La Paz Hospital in Madrid.

In a statement the hospital said the latest operation will seek to "remove the remains of the tumour".

Such a shame, hope he makes a full recovery.
The Moose sees all, hears all, knows it all. Listen to your
local moose, Folks!
Top

An update on the story:

Spanish golf legend Seve Ballesteros was described as being in a stable condition Saturday after
undergoing a third, successful operation to ease swelling in his brain and remove the remains
of a tumour.

The La Paz hospital in Madrid which has been treating Ballesteros said he would remain in care
for several days.

"He is in a serious but stable condition at the intensive care unit where he will remain for the
next few days," a hospital spokesperson told AFP.

The hospital added that no further statements would be made during the weekend or Monday
"unless there is a change in his condition". 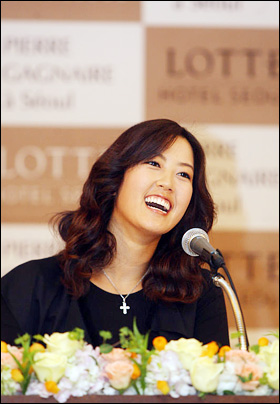 Michelle Wie at a press conference in Seoul on Dec. 16

Michelle Wie is in Korea for the funeral of her grandfather, who died on Dec. 10. He was an emeritus professor of Seoul National University. She will return to the U.S. after Christmas.

Wie becomes a full-fledged member of the U.S. LPGA Tour next year after she passed Qualifying School with the seventh best score last week. It was a crucial moment in Wie's golfing career, with swing coach David Leadbetter telling ESPN that if she did not make the cut, people would have called her "Michelle Who."

Wie, who is still only 19, had special permission to play on the LPGA Tour through invitation by sponsors, but now she has earned a spot to compete on her own, and she said she wants to be a "completely different" player from the past. http://english.chosun.com/media/photo/n ... 001_00.jpg

This young golfer is proving herself to the golf world that she can play professionally. She will be working towards some professional wins of her own soon.
80s pop music fan here!
Top

Golf sensation Ryo Ishikawa received a huge present on Christmas Day and flashed his signature bashful smile one last time before the end of the year.

A 17-year-old first-year pro, Ishikawa won the athlete of the year award at the Japan Professional Sports Grand Prize ceremony at a Tokyo hotel on Thursday evening.

Ishikawa is the youngest athlete to ever win the award, topping (current Boston Red Sox pitcher) Daisuke Matsuzaka, who won it at the age of 19 when he played for the Seibu Lions in 1999. http://search.japantimes.co.jp/cgi-bin/ ... 226a1.html

Big trophy for the Grand Prize! I encourage the young golfer to get his picture taken a few more times with the cup before putting a dust cover over it. There will be many times he will need to polish it until the next ceremony comes along.
80s pop music fan here!
Top

JOHN Daly has admitted he has been suspended for six months by the PGA Tour for conduct that brought unwelcome
publicity, including a night in a North Carolina jail to sober up. "Is it fair that I got suspended? It's not fair in reality,
but it's probably fair in perception," said Daly.

This is the second time the 42-year-old two-time major champion has been suspended. He called this the lowest point
of a wild 18-year career.


Hopefully he can straighten himself out and get back on track.
The universe is big It's vast and complicated and ridiculous and sometimes, very rarely
impossible things just happen and we call them miracles
Top

Keen golfers are being warned by doctors that they could be risking their hearing for their sport.

Players who use a new generation of thin-faced titanium drivers to propel the ball further should
consider wearing ear plugs, experts advise.

Ear specialists suspect the "sonic boom" the metal club head makes when it strikes the ball damaged
the hearing of a 55-year-old golfer they treated. They outline the details of this case in the British
Medical Journal.

The man had been playing with a King Cobra LD titanium club three times a week for 18 months and
commented that the noise of the club hitting the ball was "like a gun going off".

PEBBLE BEACH, California: Way down from the top of the leader boards and from the bright sun shining on PGA Tour stars, down below even the exempt players whose names are vaguely familiar, there is a layer of professionals who have no status on the tour. Each year, they fight it out at qualifying school to see if they can regain their standing and get back out where the weekly purses are about $5 million.

J.P. Hayes is one of those golfers, a 43-year-old pro from Appleton, Wisconsin, whose most noticeable statistic from 2008 was missing 11 consecutive cuts. He lost his card and was disqualified from the second stage of Q-school in November for inadvertently playing a prototype golf ball that was not yet on the U.S. Golf Association's approved list.

After the year he had, the only way Hayes could normally have gotten into any A-list event, like the AT&T Pebble Beach National Pro-Am this week, would have been by writing letters and calling sponsors, essentially begging for an exemption.

But Hayes, a tour veteran who has earned about $7 million during his career, was invited back to Pebble Beach, and at least four other PGA Tour events this year, because of how he came to be disqualified over the prototype golf ball: He turned himself in. http://www.iht.com/articles/2009/02/11/sports/GOLF.php

The honour system appears to be working with the sport of golf. Mr. Hayes got the equivalent of a golden ticket when he received unsolicited invitations to play at 2009 events. Congratulations!
80s pop music fan here!
Top

Wie Starts as No.2 at SBS Open

Korean-American Michelle Wie shot a six-under 66 tying for second with Yani Tseng of Taiwan in the first round of the LPGA Tour SBS Open, Wednesday.

Wie made her debut as a full-fledged LPGA Tour member at her home island of Oahu. The 19-year-old played the first SBS in 2005 as a 15-year-old amateur and tied for second.
``I really want to win the open,'' Wie said to the Korean reporters in the Oahu, Hawaii, Wednesday.

Another promising rookie Shin Ji-yai of South Korea shot even 72 recording 35th. She made four birdies and bogeys each.

John Daly can stand to pick up a few tournaments during summer after his 6-month timeout is over. Gotta keep learning how to control his liquor, else his career will be more caddy than player to watch.

Michelle Wie is generating coverage as well as getting young female fans following her tournaments. Can she get a big endorsement deal with a sports or auto company? A link-in with Asian companies would help too.
The count is in...
Top

Matthew Syed
Few sporting occasions in the coming months will set pulses racing faster than the return to competitive action of Tiger Woods after an eight-month absence because of reconstructive surgery on the anterior cruciate ligament of his left knee. Mark O'Meara, who has practised with Woods during his rehabilitation, believes that the world No 1 could be back in action as early as the Accenture Match Play Championship in Arizona next Wednesday. “I know he's pretty much almost ready to start back, so I wouldn't be surprised,” O'Meara said.

Woods, 33, has cast such a long shadow over golf during his enforced interregnum that some have ventured the assertion that an asterisk should be placed alongside the names of those who have won competitions in his absence. While such sentiments are more than a little discourteous to those who made hay, most notably Padraig Harrington, who has triumphed in back-to-back majors, they attest to a position of dominance commanded by Woods that few athletes have matched in any sport. http://www.timesonline.co.uk/tol/sport/ ... 755028.ece
80s pop music fan here!
Top
Post Reply
124 posts