Oil spills and their aftermath

That's what we see from space. Let's try to keep it that way.
Post Reply
44 posts

BP's troubles keep growing. They focused on the oil slick floating on top, but forgot the one on the bottom of the ocean. Out of sight out of mind worked for a while but no longer.

There was an article about seahorses taking a hit to their population as their shallow water marshes got slopped on by the oil. This article about oil sediment is an eyebrow lifter. Which politicians are keeping on top of the oil spill cleanup and seeking reelection in November?
Frozen? Not I. Love hot drinks and ice rinks.
Top

Lots of feelings over oily sediment. Most of us are learning about the waste by products of those oil breaking down creatures in the water for the first time. Time to learn more about marine biology.
Enbridge had a possible leak in Buffalo today--

Enbridge Fixing Damaged Pipeline in Illinois as Smaller Link Is Shut Down
By Paul Burkhardt and Mario Parker - Sep 14, 2010 11:02 AM ET

The line can ship 670,000 barrels a day of oil from Canada to the U.S. Midwest, equal to more than one-third of that region’s imports. Oil futures in New York have risen 4.8 percent since the closure Sept. 9, while gasoline in the Chicago spot market has gained 10 percent on speculation that refiners will have to cut output, leading to tighter fuel supply.

“The outage of Enbridge’s 6A pipeline continues to drive prices across the Atlantic and the timing of the repair will be very closely watched,” David Wech, head of research at JBC Energy GmBh, a Vienna-based industry consulting firm, wrote in a report today. http://www.bloomberg.com/news/2010-09-1 ... ate1-.html
You'll be smiling if you sing some songs.
Top

This is going to be a very hard one on some of the non-humans of this world. After all some birds to fish to turtles & more know this area as a resing place or a place to bring in their new ones.

I guess you culd say that PB has done a good job of why Darwin wrote his book. Also remember some will not be replaced.

I am thinking about the Sock-Eye Salmon that was to be 4 million last season & it was not even 1 million. Something stopped them, for this season everyone is simply amazed at a maze of such Salmon they have never heard of before. Something made these salmon wait a season. All are wondering why yet it is not an age difference. Between what was here last year & now----must be something about the females to the males.

Before I could obtain a job as Instrument Man on the Trans Canada Hwy, I worked with a fish hatchery & in some cases we would fence off the water the males & females were swimming to, then pick out both sexes to toss them into large roped sections so we could mix the eggs & the sperm ( a trick I was not ready to see at the time) & have lots of finger-lings progressing. A new one for me I can assure you.
Top

Joe MacInnis, a renowned deep-sea explorer and researcher, will share his insights into the catastrophic BP oil spill and its impact during a public talk tomorrow in the Humanities Theatre. MacInnis, who was the first man to dive beneath the North Pole, will deliver this year's TD Canada Trust Walter Bean Lecture, entitled "Oilstorm: Leadership Lessons from the Gulf of Mexico". It will start at 4 p.m. Thursday.

Last June, MacInnis was one of 28 experts asked to identify possible solutions for controlling the worst oil spill in U.S. history. In his talk, he will draw on his vast experience with the Gulf of Mexico's waters and with the creatures and people who depend on them. He will discuss the importance of leadership in times of crisis, as well as some critical lessons salvaged from the disaster. Using dramatic video clips, MacInnis will demonstrate how great leaders acquire and use 12 essential traits to enhance personal performance. http://www.bulletin.uwaterloo.ca/
80s pop music fan here!
Top

One tough and very lucky little dolphin survived the disaster. He fought the odds and came out on the winning side and is now safe
in a comfortable new home. 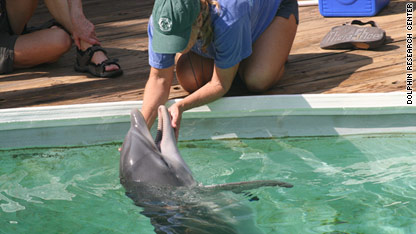 BP has fallen off the mainstream press attention for a few months. I had read that BP was going to sell off their Texas wells?
Frozen? Not I. Love hot drinks and ice rinks.
Top

A spill is not good news at all. What a way to mark Shrove Tuesday a.k.a. Fat Tuesday, a day to use up the remaining lard or animal fat in one's pantry before the start of Easter Lent.
80s pop music fan here!
Top

One year after the worst oil spill in U.S. history, the government is slowly handing out new permits to allow deep-water drilling in the Gulf of Mexico -- a move oil industry insiders say is a safe one.


Safe? It wasn't safe a year ago and suddenly it's safe to drill again. I think the bigger problem then the so called safe technology are the people in charge who chose to cut corners, ignore the safety issues to get the job done no matter what. We have seen the results and the Gulf is still paying a heavy price for greed.
Turn it up, turn it up, little bit higher radio
Turn it up, turn it up, so you know, radio
Top

A Cdn interest in the various birds is worried about one, for they only lay ONE egg & if damaged by the oil spill messes then their population can become rather short in the world, what with just one egg.
Top
Post Reply
44 posts