What have the politicians done for constituents lately? Why top up on expense claims to keep living standards nice and current. The one politician supposedly living in a trailer--is he really in a campground with electrical and water hookups? It sounds so unlikely in wet and cold England.
Old salt on board.
Top

British Airways' crew union is to strike during Christmas. One worker wrote response to item in newspaper about why union workers felt strike necessary. Crew get lot of negativity but management make decisions that crew have to follow. Stress, yes.

When a BA air steward responded anonymously in the comments to Daniel's post on the strike, I thought it worth highlighting their defence to get your reactions.*
Here's what they wrote:

Free speech? I think not.

I risk losing my job if I am identified. 5 senior crew have already been suspended for comments such as these. This is an honest, sincere & truthful response to the above.

Having read all the previous comments, and been deeply upset at the viciousness and hatred toward BA cabin crew, I am compelled to write "our" version of the situation, which I don't believe people are actually aware of.

In reply to those of you who think BA crew are glorified waitresses/waiters, can I just say what a short memory you have! Worker replies
Happy New Year-2015 now on scene.
Top

The expenses claimed by Members of Parliament have returned to predominate political news in the UK. Some MPs have managed to get reductions on expenses that had to be repaid, but other MPs in line for charges are arguing over the charges and the expenses.

Three MPs said today that they planned to dispute the right of the courts to try them over their expenses claims after they learnt that they are to face prosecution.

The Labour MPs Elliot Morley, David Chaytor and Jim Devine, as well as Lord Hanningfield, a Tory frontbencher and leader of Essex County Council, face up to seven years in jail for theft. They are expected to stand trial later this year after a nine-month police investigation.

All four have been charged under the Theft Act 1968 and will appear in court at 2pm on March 11. They are the first MPs to face legal action by prosecutors over their expenses. http://www.timesonline.co.uk/tol/news/p ... 016485.ece

Should the MPs being tried find themselves having a court judgement given to their claims, imagine how hard it will be for them to face their constituents who rightly will wonder whether their interests are being represented in Parliment.
80s pop music fan here!
Top

The UK Parliament might need to mind what is happening with money woes in Europe and take the lead in figuring out what MP spending is acceptable and what is not. It is an election year.

Home Secretary's fury as expenses MPs claim privilege
Jenny Booth
Alan Johnson, the Home Secretary, has expressed his anger that the three Labour MPs facing criminal charges over their expenses should try to gain immunity from prosecution through parliamentary privilege — while still receiving tens of thousands of pounds in “golden goodbyes” on quitting the Commons.

Long-serving MPs Elliot Morley, Jim Devine and David Chaytor are likely to get the payments because they will still be “innocent until proven guilty” by the time of the general election, it emerged today.

All three MPs deny allegations of false accounting, and have pledged to defend themselves “robustly”. A fourth parliamentarian, the Tory peer Lord Hanningfield, is also facing charges under the Theft Act. http://www.timesonline.co.uk/tol/news/p ... 018291.ece
Frozen? Not I. Love hot drinks and ice rinks.
Top

The strike by airline crews that was to have occurred at Christmas is on now in Britain. British Airways staff walked out on their jobs for a three-day strike.

The airline said it had been able to increase the number of flights, as staff passed through a number of picket lines to report for duty, and would be selling seats on a series of Boeing 747 flights planned for tonight. Customers have been advised to check the BA website to find out what extra services were now available.

Thousands of passengers are expected to suffer severe disruption to travel plans as around 12,000 staff stage a walked out over the airline's cost cutting plans. The Unite union's assistant general secretary Len McCluskey said the industrial action would "restore dignity to British cabin crew", adding they would not be bullied in to accepting a new deal on pay and conditions. http://www.timesonline.co.uk/tol/news/p ... 069523.ece

Revealed: US firm issues British visas... and MPs were not told
By Jason Lewis
Last updated at 1:03 AM on 04th April 2010
Millions of visas allowing foreigners to enter Britain are being issued by an American company and a High Street travel agent rather than British diplomats.
The system – never officially announced to Parliament – means that instead of filling in a form at a British embassy and facing an interview by diplomatic staff, visa applicants are directed to commercially run ‘official’ offices around the world.
And hundreds of thousands of applicants simply fill in a form on a website run by the US company.

The two private firms are responsible for dealing with about 80 per cent of the 2.75 million visa applications every year, two million of which are successful.
A Mail on Sunday investigation has revealed that the new system – quietly introduced over the past two years – has been beset by problems, including one company’s staff selling visas. Critics fear it is fuelling the numbers of people who come to Britain and overstay after their visas expire, adding to the estimated one million illegal immigrants already in the country.

A key document being issued by non-government officials--was that a privatisation move under the auspice of saving money or just frustration that government officials could not keep up with application volume?
80s pop music fan here!
Top

British Prime Minister Gordon Brown’s stumbling re-election campaign may be down for the count after a forgotten body microphone caught him insulting a pensioner.

On Tuesday, Brown visited a community works project in Rochdale where convicts were collecting litter. Gillian Duffy, a 66-year-old widow, was standing at the back of the crowd chatting with reporters. She was summoned to the front by Brown’s staff and encouraged to ask the Labour Party leader about her concerns. 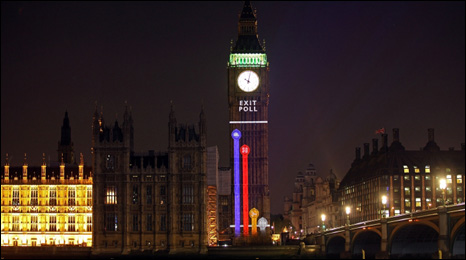 David Cameron will fall 21 seats short of a Commons majority, according to a BBC/Sky/ITV general election exit poll. The Conservatives would have 305 MPs, up 95 on 2005, Labour would have 255, down 94, and the Lib Dems 61, down 1. Nationalists and others would have 29. That means Labour and the Lib Dems together could not have a majority.

A day after the polls closed, it remains unclear who will lead the country after the general election delivered a hung Parliament. David Cameron approached the Lib Dems after the Tories won the most seats but finished 20 short of a majority. Labour leader Gordon Brown also says he is prepared to talk to the Lib Dems.