A young Missouri man has turned to the Internet in search of investors for his expedition into the remote jungles of Africa seeking to document undiscovered flora and fauna. That is not so unusual, but one of the creatures he hopes to find is: a living dinosaur.

The region Stephen McCullah, the organizer of the expedition, has chosen to explore is the reputed home of the Mokèlé-mbèmbé, a dinosaur-like creature said to be up to 35 feet long (11 meters), with brownish-gray skin and a long, flexible neck. Many locals believe that it lives in the caves it digs in riverbanks, and that the beast feeds on elephants, hippos and crocodiles.


I'm all for finding the undiscovered species that are waiting to be found in the Congo, but I think the Mokele-mbembe is a myth. I think we would have seen some evidence of its existence by now.

Finding a spider the size of a dog would be remarkable enough, as the largest-known tarantula, the Goliath birdeater, lives in South America and has a leg span of "only" a foot.

Angel investors or folks willing to put up their money to share in the adventure might step forward, if the would-be explorer has a convincing plan and has prepared for the trip. However, administrative things like keeping a blog or website going, handling personal pitches to investors etc. might take away time from actually getting ready for the trip.

He needs an administrative assistant-virtual ones exist on the Internet.

In 1965, paleontologists dug up a gargantuan pair of dinosaur arms in Mongolia. Their shape and hollow build suggested they belonged to a fearsome predator like the two-storey-tall Tyrannosaurus rex — but much, much bigger.

Now, scientists have finally uncovered the rest of the dinosaur those armed belonged to — and found an astonishing animal. "This dinosaur is even more bizarre than we could even possibly have imagined," said Canadian dinosaur expert Philip Currie, who was part of the international research team that made the new discovery. The team, led by Yuong-Nam Lee at the Korea Institute of Geoscience and Mineral Resources, described their findings in this week's issue of Nature.

They should have joined this search instead of the lark they were raising money for.

One weird but dangerous looking dino, but think T-Rex would win the battle on who is stronger.
Top

Scientists examining 99-million-year-old amber hit pay dirt when they discovered both the first direct evidence of a tick feeding off a feathered dinosaur, and also an entirely new species of tick. Two specimens of the newly discovered species, Deinocroton draculi — "Dracula's terrible tick" — were found trapped inside the Burmese amber. While feathers and ticks previously have been found together in amber, there had never been direct evidence of ticks feeding off a dinosaur. 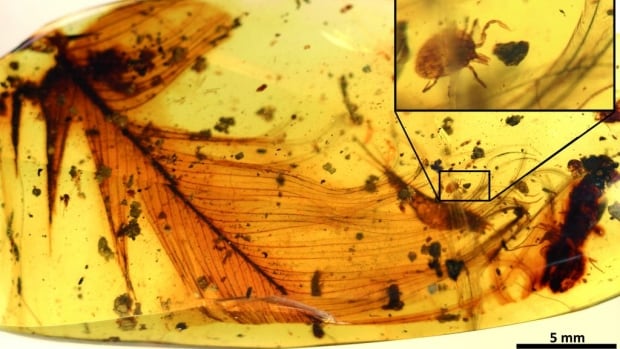 The what if may not be that far away in terms of another mass extinction due to climate change or
Mother Nature is pissed off. No matter the how, the discussion will always come back to the first
one and the Dinosaurs.